When I first moved to Melbourne in 2003, if you’d asked what the best brewery in the state was, I would have told you that it was a toss-up between Mountain Goat and the Holgate Brewhouse.

Back then, I’d take any excuse to pop out to Woodend, order a paddle of Holgate beers, and generally soak up the country vibes. Whenever I visited I’d marvel at the range of beers they brewed on the premises, all of which were quite good examples of type.

Of course, since then, craft beer has taken off in Victoria and it seems like you can barely turn around without tripping over a new craft brewery that’s sprung up underfoot. Breweries are doing all kinds of new and creative things and it’s probably fair to say that my tastes have matured a bit too – with all these great beers around it would be hard for them not to.

On my trips to Woodend, it felt more and more like the Holgate was playing it safe. Sure, the brewery still did some great limited releases, but it seemed that most of their taps were taken up with beers that, whilst they were good examples of type, didn’t really feel very special.

It seemed like a long way to go for similar beers to the ones I could order at any pub in the city. Which made me a bit sad really, and I’m sorry to say that I visited less and less.

I’ve had reason to drop out to Woodend a few times in the past year and I’m pleased to say that either I was wrong or the Holgate has changed something up.

The majority of the taps at the Holgate are still the solid range of the beers you’d expect: lager, pale ale, pilsner, bitter, & porter. All of these beers are good examples of type, quite reasonably priced, and great if they’re what you’re in the mood for.  However, I’m pleased to be able to report that they’ve also got some interesting sours and bigger hoppier beers on the tap list as well, including a couple of XPAs that are truly great (I’m particularly fond of the X-Wing).

The kitchen turns out a range of gastro-pub classics, hearty and delicious, and comforting in the way that only those classic country pub meals are. The kitchen is quick, servings are generous, and meals are quite reasonably priced.

When it comes to playing games, the spaces at the Holgate are open and well lit, and although it can get a little crowded at meal time it’s generally not too much trouble to find a table. The tables scattered throughout the bar are small and circular, and although there are some picnic benches outside they’re a little gappy. The best tables for games are, not surprisingly, in the dining room. 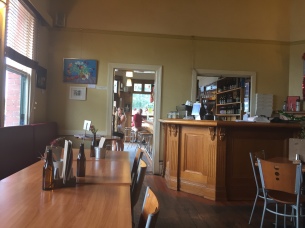 As such, it’s probably best to try and get a table in the dining room if you intend to play anything that requires a decent sized play surface. As the pub gets pretty busy at lunchtimes on the weekend we’ve found it best to either arrive for a late lunch, or just after lunchtime, and then spend the afternoon playing games.

The dining room is also a good idea from a noise perspective as the Holgate sometimes has live music playing in the courtyard at the back of the pub. It’s generally not too noisy to carry on a game in the dining room even if there is music playing, however it probably wouldn’t hurt to check whether anything is on if you’re intending to pop out to Woodend to play some games.

Although the Holgate is definitely a country pub, it is a short stroll from Woodend Station, which is easily accessible by train from Southern Cross, Footscray or Sunbury stations. As such, the Holgate is a  which makes a pretty great option if you live in Melbourne’s west and want to pop out of the city for an afternoon of gaming on the weekend and take in the country air.

And maybe take a stroll to walk off that third pint.