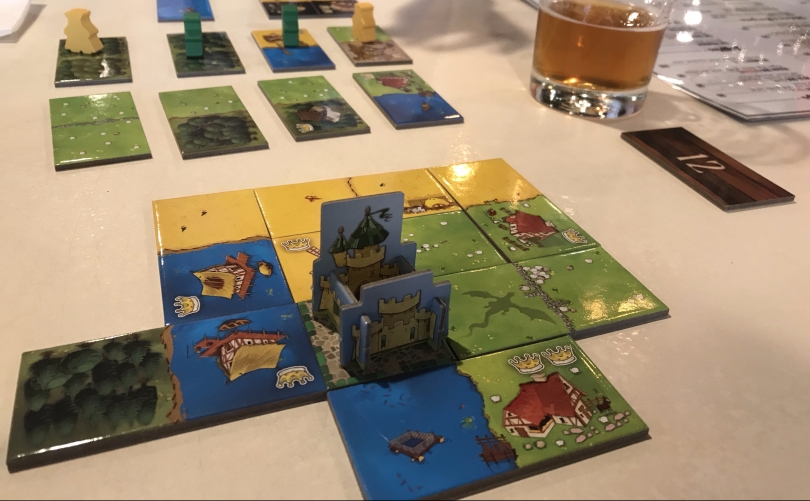 Kingdomino is one of the many games that we got to play for the first time at PAX Australia. We checked a copy out of the board game library, played a few games with three players and were pretty impressed by how simple and fun it was, and how easy it was to play in the cramped confines of the PAX board game space.

Later, when the crowds at PAX had worn us out a bit, we retired to a nearby Bavarian brauhaus for a few of steins of delicious hefeweizen. The beer hall had long shared tables that were really narrow, and we quickly realised that none of the games we’d purchased that day were going to fit on to such a small play surface.

There was nothing for it but to head back to PAX and purchase a copy of Kingdomino from the Blue Orange booth and get some games in over beers.

Since then we’ve played Kingdomino with all of the available player counts (2-4) and while I like it with any number of players I have to say that Kingdomino is one of those rare gems that is great for a small group, and exceptional as a two player experience.

It’s probably worth mentioning at this juncture that I play a lot of games as a social lubricant, they help me to hang out with groups of strangers while keeping my anxiety in check. As such, I generally like games for small or medium sized groups,  four players is often my sweet spot because it means I can meet a few people but probably still remember everyone’s name. That said, a lot of games that are great fun with four players lose something playing with three players or two.

For me, then, Kingdomino is a great game because I can drag it out with four players and have a great time, but as the player count decreases the game gets even better. With two players Kingdomino is positively magical.

Which is weird, because it’s basically a single mechanic game.

The core of the game is a set of cardboard tiles (the dominos that give the game it’s name) each of which depicts two squares of terrain, wheat fields, farms, forests, swamps and so on. Some dominos have two squares that are the same (doubles), double forest or whatever, and some squares of terrain have crowns on them which serve as multipliers – more on that later.

When your turn comes around you pick up a domino, place it in your play area so that one square is touching your starting castle square (which is wild) or a matching piece of terrain, and claim the domino that you want to play next round from the pool of available dominos (usually one per player).

That sounds really simple, and it kind of is, but all the while you’re doing your best to be able to play every domino, whilst making a kingdom with the castle square in the centre, with large areas of contiguous terrain, and with as many crowns as possible on your largest areas of terrain.

When you’ve played the game a few times you have a pretty good grasp of the dominos which are in the deck, how many of each terrain there are and roughly how many crowns. So, with four players it’s possible to identify a winning strategy pretty early, and lean into it hard, but when you’re playing with less than four players a random selection of dominos get removed from the deck which means there’s some uncertainty about what’s going to come up that game.

It’s probably also worth mentioning that whilst the game is played in rounds the turn order isn’t fixed, players take turns based on the domino they claimed in the last round. Because you’re selecting the domino you’ll play in the next round at the end of your turn, and that domino determines where you are in the turn order for next round there’s some interesting tactical decisions from round to round. Dominos with two squares of the same terrain tend to earlier in the turn order, then dominos with two squares of different terrain, then dominos with a single crown, and finally dominos with more than one crown.

So, do you select a double, knowing you’ll get to play early in the next round, and have your choice of dominos to play the round after, or do you select the domino with that sweet sweet multiplier, knowing that you’ll be playing last next round and you’ll have to take whatever domino is left?

These are interesting decisions, but they aren’t too taxing to make, and so the game moves along at a lively clip. It doesn’t get in the road of conversation, it won’t slow you down drinking your beer, and it really is a great time.

Scoring is also fast and easy. You look at your finished kingdom and count up how many contiguous squares are in each block of terrain and then multiply the number of squares by the number of crowns that are on that area of terrain, which, of course, means that areas with no crowns will get you a zero score. Then there are bonus points for having your castle square in the centre of your kingdom, and for having a complete kingdom (IE: for being able to legally play every domino you’ve drawn).

So it’s a light, fun, social, game with three or four, but things get a bit more intense when you’re playing Kingdomino with two players. This is because there are four dominos in the available pool each round, which means each player has two turns in a round and has to pick two dominos they’d like to play in the following round. Thinking two turns ahead, again, isn’t that taxing, but it does increase the consequences of those choices just enough to make the game really shine. Combine that with the fact that you’re now only playing with half the deck of dominos, and therefore don’t have a solid handle of what the domino pool for any given game is and it’s a much more seat of your pants experience.

I absolutely love it.

Given all of those cardboard dominos, there’s not a lot that you can do to protect Kingdomino from a pub environment. That said, it has become one of our pub staples because it’s fast, light, super fun, and because it plays on a small table. I only wish Blue Orange produced a deluxe version where those cardboard tiles were replaced with plastic or bakelite dominos, then Kingdomino would be go anywhere perfect.

It’s probably worth mentioning that the sequel to Kingdomino, Queendomino, came out this year and a lot of people have said that Queendomino replaces Kingdomino for them. I’ve not played Queendomino yet, but I’m not sure if that will be true for us, because I really love Kingdomino, and because the photos of Queendomino show more components and a bigger footprint. That said, I can’t wait to get my hands on Queendomino once Suzanne returns from the US in December.